Home Page Ostpolitik at a Crossroads: Germany and Russia after the Poisoning of Navalny

Ostpolitik at a Crossroads: Germany and Russia after the Poisoning of Navalny
211
The poisoning of Alexei Navalny is a challenge for the German government’s policy towards Russia, which combines criticism of human rights violations and international law while maintaining cooperation to guarantee German economic and security interests. Although Germany’s response to the attack on the Russian opposition leader so far does not indicate a change in strategy, additional aggressive actions by the Russian authorities may lead gradually to a new course.
Lidia Gibadło 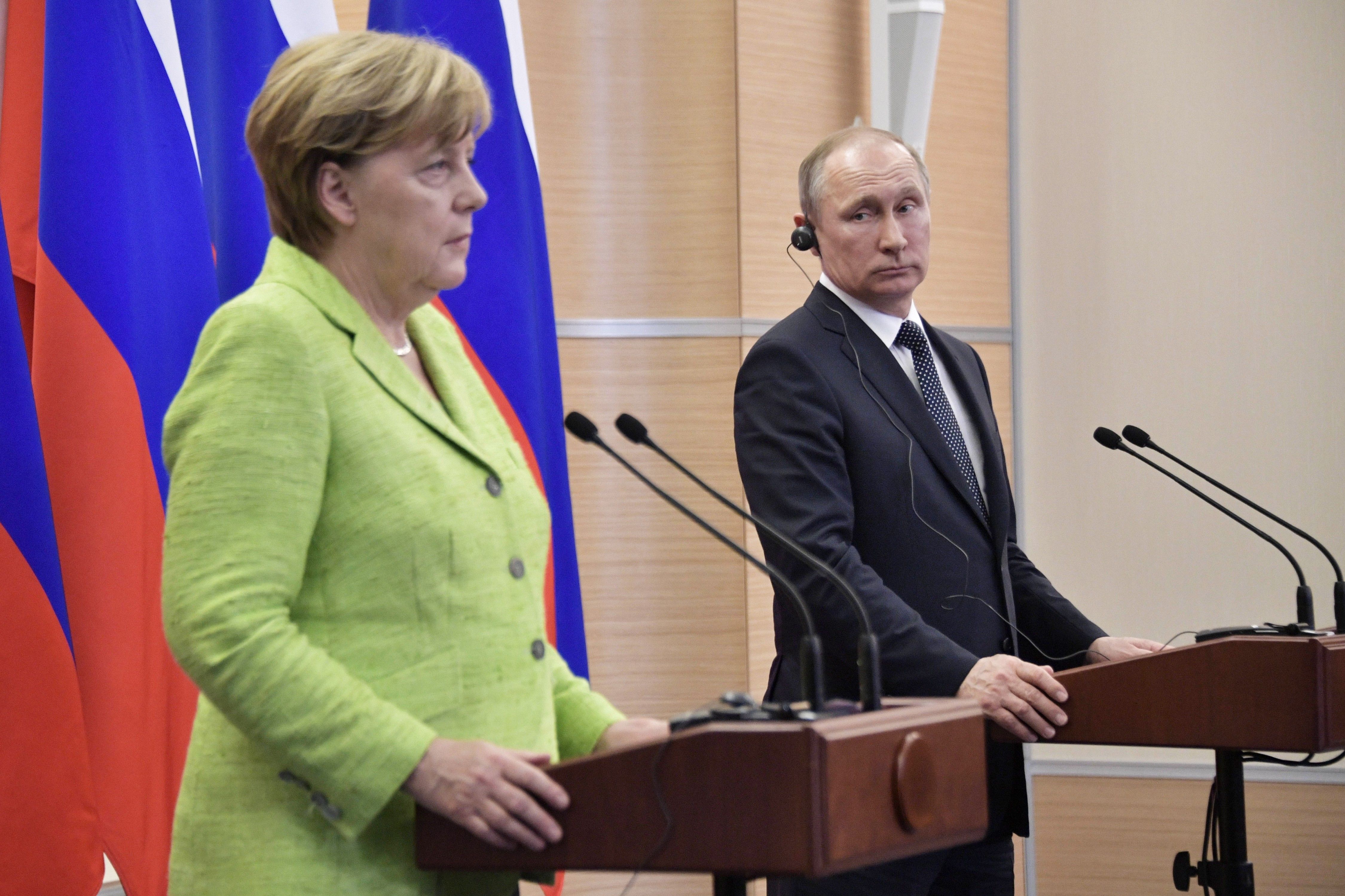 With the poisoning of Navalny, the German government was faced with a dilemma about how to deal with Russia. Due to the lack of involvement of its authorities in explaining the matter, the Greens, a part of FDP, and individual CDU MPs demanded a decisive response—Germany’s withdrawal of support for the Nord Stream 2 (NS2) gas pipeline and an EU entry ban and freezing the assets of representatives of the Russian administration. There were also ideas in the debate to impose economic sanctions on Russia. This position was opposed by leading representatives of the government, most politicians from the grand coalition and other opposition groups, stressing that such actions would threaten the interests of Germany. Ultimately, Germany together with France proposed EU sanctions on people involved in Navalny’s poisoning and on entities that may have participated in the production of the nerve agent used, Novichok. Ultimately, six Russians in state administration and the intelligence services, as well as the State Scientific and Research Institute of Organic Chemistry and Technology, were included. However, these actions will not significantly affect nor are they a sufficient answer to the dilemma concerning the foreign policy strategy towards Russia, which is becoming an increasingly serious problem for Germany.

Premises for Cooperation with Russia

The opponents of tightening policy towards Russia point to the consequences for German security interests. While positioning itself as a defender of a multilateral international order, Germany supports the maintenance of cooperation bilaterally and within international organisations with partners often representing different positions. Therefore, maintaining the dialogue with Russia is intended to help ensure stability in the EU’s neighbourhood. The factor that strengthens this belief is the recent drawdown in the American military presence in the Middle East—in 2019, President Donald Trump decided to withdraw 1,200 U.S. troops from Iraq and about 400 operators from Syria. Another important argument is Germany’s fear of weakening transatlantic relations as a result of the reduction of the American presence in Europe. In July, the U.S. Defence Department announced that the number of troops stationed in Germany will be reduced by 12,000. troops, of which 6,400 will return to the U.S. The weakness of the EU security and defence instruments, as well as the underinvestment and staff shortages in the Bundeswehr, are  supposedly obstacles to stronger actions against Russia.

Supporters of maintaining the current course in relations with Russia also point to the harm to German economic interests if sectoral sanctions are extended. In 2018–2019, German direct investment in Russia reached the highest level since the 2007 financial crisis (€3.8 billion and €2.6 billion, respectively). Russia also remains Germany’s most important source of oil, coal, and gas imports, which in 2019 covered 78.1% of the latter’s primary energy demand. Gas is of particular importance as Germany is the largest gas consumer in the EU, with consumption in 2019 of 88.7 billion m3 (bcm); according to German government representatives, this will increase. Additionally, the construction of the NS2 would strengthen Germany’s status as one of the most important gas hubs in Europe.

The scale of the problems currently faced by the EU also is a factor hindering further restrictions against Russia or extending the existing sanctions. Germany is heading the EU Council now and is focused primarily on combating the COVID-19 pandemic and limiting the economic downturn in the Community, as well as concluding negotiations on a trade agreement between the EU and UK and working out an agreement on a new pact on migration and asylum. Moreover, it is unlikely that any further economic sanctions on Russia would be supported by all EU countries.

For A New Ostpolitik

Despite maintaining the course with respect to Russia, arguments in favour of a correction are appearing more frequently in the German public debate. Supporters of change point out that Russia’s actions petrify the existing conflicts in the EU’s neighbourhood rather than end them. This is primarily about the lack of progress in the negotiations regarding the conflict in Donbas or support for Syrian President Bashar al-Assad. Additionally, Russia’s actions pose a threat to Germany’s internal security. German state institutions and political foundations have been the targets of Russian cyberattacks: according to information from German counterintelligence, in 2015 the APT28 group associated with the Russian GRU was behind the infiltration of the Bundestag’s internal communication network. Another problem is that Russian secret services are active in Germany: most likely, the murder of Zalimkhan Khangoshvili, a former military commander in Chechnya, in Berlin in December 2019, was carried out by the Russian security services. There are also concerns about the unclear connections between the far-right and the anti-EU Alternative for Germany (AfD) and Russia.

Supporters of tightening Germany’s stance towards Russia also point to the political costs of continuing the present Ostpolitik, symbolised by NS2. Maintaining support for the project and its business narrative complicates Germany’s relations with Poland and the Baltic states, which treat the gas pipeline as a project aimed at Ukraine that further strengthens Russia’s influence over German foreign policy. The investment is also one of Germany’s most serious problems in relations with the United States: the threat of new sanctions on the project makes it difficult for Germany to cooperate with one of its key trading partners and the guarantor of European security. Its position on NS2 will not change if the Democratic Party candidate, former Vice President Joe Biden, who opposes the continuation of the project, wins the upcoming presidential elections.

Additionally, maintaining relations with Russia in the current conditions contradicts the moral dimension of German foreign policy. The repeated violations of human rights, restrictions on the activities of foreign NGOs, repression of the opposition, including murders blamed on Russian security services, creates a problem for the German government both in its foreign policy conduct and the public debate.

The poisoning of Navalny makes it difficult for Germany to maintain its current strategy towards Russia, but a swift revision is unlikely because of the deeply embedded perception of cooperation with Russia as a key element of German Ostpolitik. However, the policy’s opponents’ arguments that the trade-offs are not worth it resonate with German public opinion and in the long run may constitute a starting point for a change in the country’s eastern policy. The pace could quicken if Russia further inflames the situation, including interference in next year’s elections to the Bundestag, or the U.S. imposes new sanctions related to NS2. An intra-German catalyst for change would be the entry of the Greens into the new federal government: an October public opinion poll indicates that the party has a chance to build a coalition with the Christian Democrats. Another factor conducive to a revision of the strategy towards Russia would be the victory in the December elections for the chairman of the CDU, one of the leading opponents of the construction of NS2, Norbert Röttgen.

The lack of a unified position among the German political parties on the strategy towards Russia opens the door to Poland to emphasise the negative consequences of continuing the current Ostpolitik, both in bilateral relations and within the EU. It also creates the conditions for formulating initiatives that will show that revision of the policy will be beneficial for Germany and will alleviate at least some of the problems related to its continuation, for example, by improving relations with the U.S. One of the proposals presented to Germany could be, for example, the creation by Germany of a fund intended for the modernisation of defence infrastructure and the armed forces of the countries of NATO’s Eastern Flank. In this way, Germany would not only strengthen the defence potential of Central Europe but also increase military spending, reducing the dispute with the U.S. over the German defence budget, which remains below the 2% of GDP target.