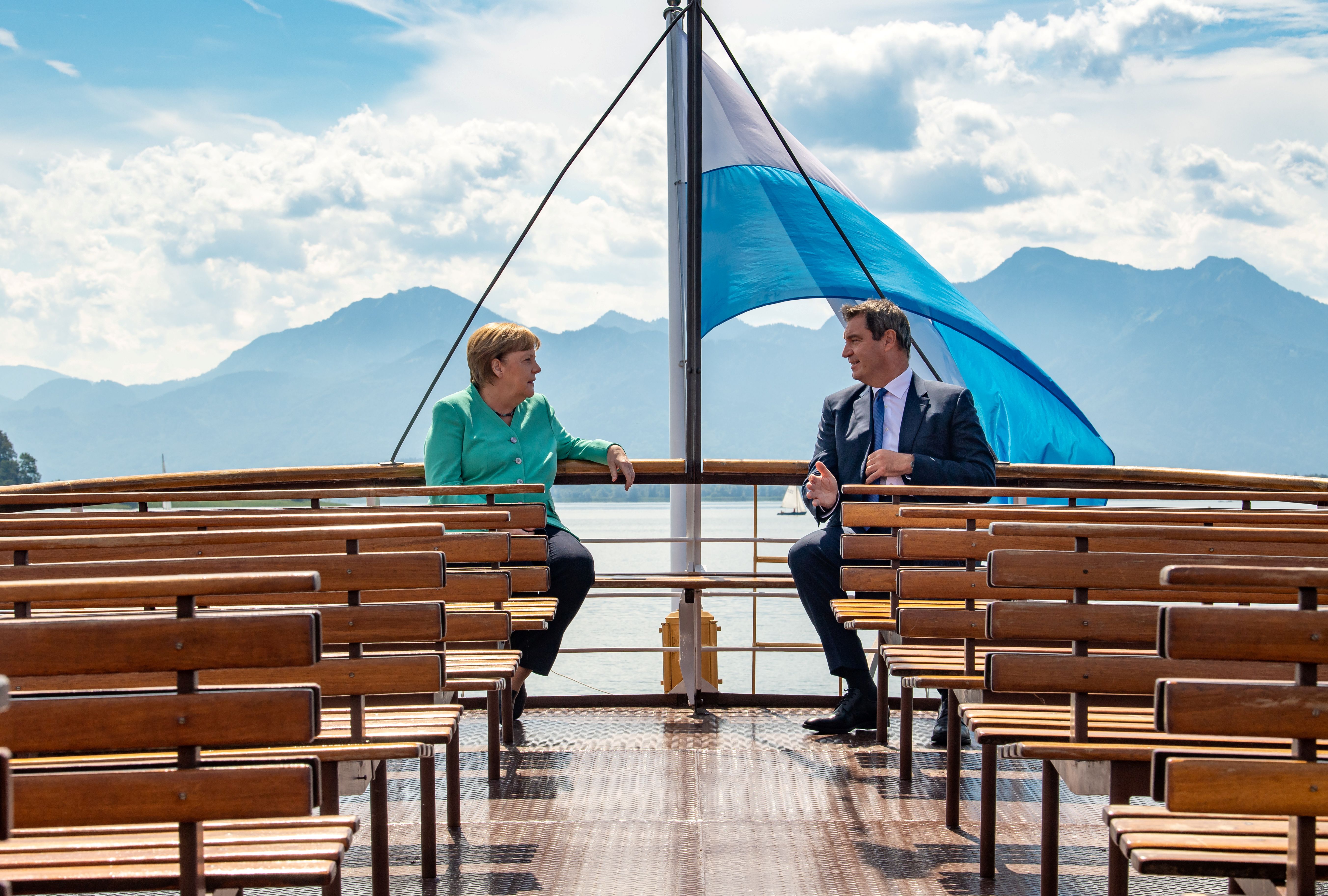 Annegret Kramp-Karrenbauer’s resignation as head of the CDU in February reopened the rivalry for the chair of the Christian Democratic Party and for the appointment of its candidate for chancellor in the parliamentary elections in 2021. To be nominated, the consent of the Bavarian CSU, which forms a joint faction in the Bundestag with the CDU, is required. The Christian Democrats have most often appointed the chair of the CDU as their candidate. The exceptions came in 1980 and 2002 when the chairman of the CSU, Franz Josef Strauss, and then Edmund Stoiber, were nominated. In the upcoming elections, the Christian Democrats may decide to take such a step again. This time, Söder, a 53-year-old CSU member who since 2007 has been a minister in the Bavarian government and in 2018 became Bavaria’s prime minister, and a year later chairman of the party, may be nominated.

Advantages of a Bavarian Candidate

The strongest argument for Söder’s nomination is the positive assessment of the CSU-Free Voters government’s fight against the pandemic in Bavaria. In the early stages, the highest numbers of cases and deaths caused by the SARS-CoV-2 virus in Germany were recorded. The regional authorities decided to quickly apply the strictest restrictions in Germany. As a result, the Land, as part of the introduced state of natural disaster, was one of the first to close schools and applied restrictions on movement. Despite the restrictive regulations, residents of the federal state assessed the actions of the Bavarian government positively: according to a survey by the Infratest dimap institute, 87% of respondents supported them in May. The strategy of the regional authorities also met with recognition at the federal level, reflected in the growing popularity of Söder. Research by the Forschungsgruppe Wahlen institute shows that he is the second highest-rated politician after Angela Merkel: on a scale of -5 to +5 points, he is rated at +2 points, an increase of 1.9 points from February.

The position of the CSU leader is also strengthened by image problems with its potential competitors from the CDU. One Armin Laschet, the prime minister of North Rhine-Westphalia (NRW), which is second in the number of cases and deaths from COVID-19. Since the beginning of the pandemic, Laschet has represented a different approach to the fight against the virus, opposing the adoption of tight restrictions and calling for a quick abolition of existing ones. However, a coronavirus outbreak in June at the Tönnies meat processing factory in NRW challenged this strategy. The regional government was criticized for being too late in containing the spread of the virus on the company’s premises. Additionally, Laschet has been criticised for making statements suggesting that Bulgarian and Romanian workers at Tönnies plants were to blame for the spread of the virus. As a result, the events of recent weeks have undermined the opinion of him as an efficient manager in times of crisis. The weakness of Söder’s two other competitors—the former head of the CDU/CSU parliamentary faction, Friedrich Merz, and the head of the Bundestag’s foreign affairs committee, Norbert Röttgen—is that they lack experience in an important position in the federal or provincial governments. Also, not being directly involved in the fight against the pandemic also prevents them from presenting their leadership skills and reduces media coverage.

Söder’s candidacy is also enhanced by the support that the CSU leader could count on among Christian Democrats who support a return to the party’s conservative ethos after the election of the new CDU leader and the end of Merkel’s term of office. Söder’s election would be a clear signal that the party is refreshing its right-wing image, which could help the Christian Democrats regain some of the electorate they lost to the AfD during the last Bundestag elections, when 24.8% of voters switched from the CDU/CSU and supported the far right.

Söder’s nomination would also be beneficial in the rivalry with the Greens, the CDU/CSU’s most serious competitor in the parliamentary elections. First, opinion polls show that in competing for the position of German chancellor, Söder, as the only Christian Democrat politician, wins against Robert Habeck, one of the Greens’ leaders and their potential candidate for the position of chancellor. Second, the announcements of a car-tax reform, the establishment of a separate climate budget, and Söder’s support for the faster phasing out of coal-fired energy are a signal that the Bavarian prime minister is open to concessions on adopting more ambitious assumptions in German climate policy. Such a position could facilitate the conclusion of a coalition between the Christian Democrats and the Greens at the federal level.

The Risk of Söder’s Candidacy

Although the nomination of the Bavarian prime minister could be beneficial for the Christian Democrats, it is not clear how this decision would affect mutual relations between the two parties. Until now, the CDU has played a dominant role in the alliance of the two groups (the so-called Union), which operates in all German states except Bavaria, where the CSU represents the Christian Democrats. It is possible that the election of Söder would induce the CSU to try to increase its influence within the EU, for example, by acquiring more ministries in the federal government. This could cause opposition from the leaders of the Christian Democrats in other Länder who cannot count on a similarly privileged position in federal structures.

Separation of the function of the CDU chairman from the German chancellor could weaken the party leader again. The takeover of the position of the CDU leader by Kramp-Karrenbauer and the simultaneous retention of the position of the head of the German government by Merkel did not strengthen the authority of the new leadership. Ultimately, the inability to enforce the decisions of the federal board on CDU members in Thuringia led to an internal party crisis and the resignation of Kramp-Karrenbauer in February. Additionally, Söder, who is not a CDU member, would not be allowed to attend federal board meetings. This would mean having no influence on the most important decisions concerning the largest coalition party and would weaken the position of the chancellor.

But above all, Söder himself must decide on the chancellor’s appointment. The CSU leader has not announced so far that he will run for the candidacy, declaring that he focuses primarily on the politics of the state. Söder’s stable position as head of the regional government and CSU leader, as well as the prospect of holding both functions for many years, speaks to him withholding any ambitions for chancellor. In the event of a defeat in the federal elections, Söder’s authority would be seriously weakened, which in an extreme scenario could even mean the end of his political career.

The factor that will determine Söder’s decision will be the satisfaction of the public with the actions of Merkel’s government in the fight against the pandemic. Effective protection of the German economy against the effects of the subsequent economic crisis and the implementation of the goals of the German presidency of the EU will help maintain the Christian Democrats’ rating at the level of 35-38%. High support for the CDU/CSU six months before the elections could convince Söder to compete for the chancellor’s nomination.

If the Bavarian prime minister decides to take such a step, his rival would be the new chairman of the CDU. It cannot be ruled out that Laschet, the most serious candidate for the position, will be replaced by Federal Health Minister Jens Spahn, currently supporting Laschet and running for the position of CDU secretary general. This is supported by the increase in its popularity thanks to its involvement in the fight against the pandemic. Given the still less-political background, Spahn might have been willing to step down and agree to be nominated for Söder.

A possible victory in the elections and Söder’s assumption of the function of chancellor would not mean significant changes in Germany’s European policy. Germany would keep its distance from French ideas to deepen European integration but at the same time would continue the implementation of the economic aid plan for the EU supported by Merkel. The preservation of the alliance with the U.S. and support for strengthening the Budeswehr would not change either. The new chancellor might be inclined to support the maintenance of sanctions against Russia. Because of the importance of trade relations with China for the German economy, Söder would be cautious about initiating a stricter course towards China.