World War II in Russia’s Foreign Policy
12
Shaping collective historical memory is an important element of Russian foreign policy. The message about the key role of the USSR in ending World War II is used to strengthen Russia’s position in the international arena and serves to consolidate the countries of the former USSR. With the approach of the 75th anniversary of the end of World War II (8/9 May), Russian diplomatic and propaganda attacks on Poland will continue.
Anna Maria Dyner 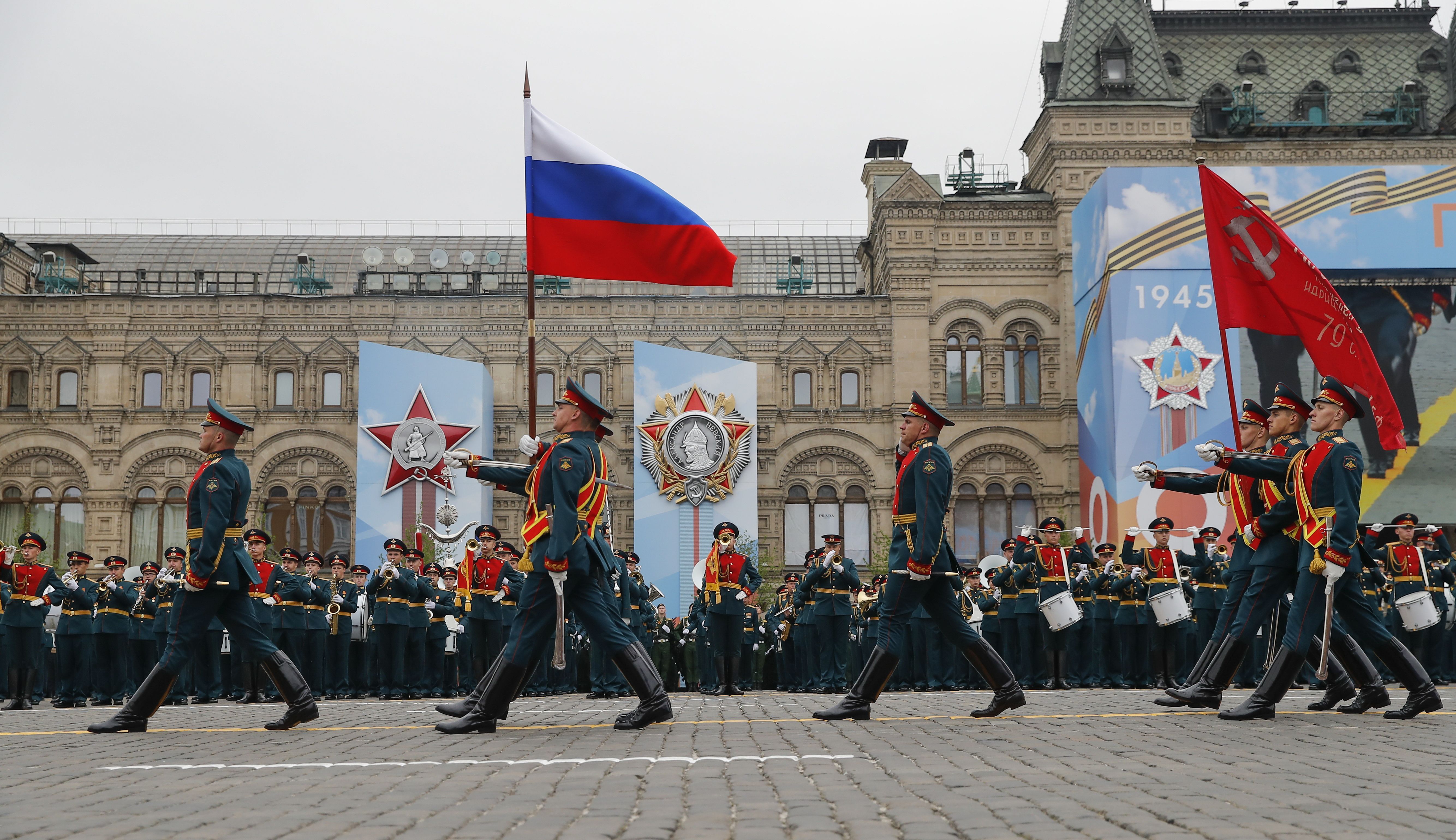 History as a Tool

Historical politics is an important part of the Russian superpower ideology and a prime element on which the concept of the Russian world (Russkiy mir) is based. It serves to build the national community and is used in Russia’s contacts with other countries. It is also used to maintain good relations or as a tool for waging information warfare against those countries with which Russia has bad relations.

The Russian authorities most often use issues related to World War II—the “Great Patriotic War”, which started in June 1941 after the Third Reich’s attack on the USSR— to cultivate the idea that the USSR won World War II and the Great Patriotic War thanks to the sacrifice of the Red Army. This serves to unite most of the countries of the former USSR and to maintain a sense of common history, and it comprises the Russian message to Western European countries that they owe their freedom to the USSR’s military effort.

At the same time, the issues of the Holocaust and the anniversary of the liberation of the Auschwitz concentration camp are used by Russia to develop good relations with Israel, which strengthens its position in the Middle East. At the same time, Russia has been trying to create a picture of Poland as an anti-Semitic state to, among other purposes, fuel Israeli-Polish disputes.

Historical policy is an important instrument of propaganda and Russia began to apply it particularly intensively in 2015 in connection with the 70th anniversary of the end of World War II, then as an attempt to break out of international isolation after the Russian aggression against Ukraine. The narrative is mostly propagated by Russian media, such as RT (formerly Russia Today), Sputnik, and social media. Diplomacy is also involved, with Russia initiating many discussions and resolutions in the UN General Assembly, the Council of Europe Parliamentary Assembly, or the OSCE Parliamentary Assembly.

From the Russian authorities’ perspective, Poland leads a policy aimed against Russia in both the historical sphere (by undermining the liberating role of the Red Army and its participation in the end of World War II) and modern context (highlighting Russia’s aggression against Ukraine). This is why Poland remains one of the countries most often attacked in Russian propaganda. By blaming Poland for joint responsibility (with Germany) for the outbreak of World War II, President Vladimir Putin seeks to justify actions that remove the odium of aggressor from the USSR, which in September 1939, under the Ribbentrop-Molotov pact, annexed the eastern territories of the Second Polish Republic, and in 1940 annexed Lithuania, Latvia, and Estonia. At the same time, when Putin is talking about Polish “anti-Semitism”, he is trying to blame Poland for the Holocaust.

These accusations, made in December 2019 during a CIS summit, were also meant to undermine Poland’s good relations with countries in the region, in particular, Eastern Partnership states, including Armenia and Belarus. Moreover, the praise of the Red Army in September 1939 can be used, for example, to deteriorate Polish-Belarusian relations—in Belarus, the date 17 September is widely considered unification day. What is more, some CIS countries oppose the policy pursued by Poland to liquidate so-called “monuments of gratitude” to the Red Army. These states argue that not just Russians fought in its ranks and that the liquidation of these monuments is dismissing the memory of their citizens. Some, such as Belarus, Kazakhstan, and Tajikistan, co-sponsored a motion for a UNGA Resolution No. A/C.3/71/L.45 on combating the glorification of Nazism, which in point 7 iterates the need to preserve monuments to all soldiers fighting Nazism, and therefore those in Poland as well.

Historical issues may also be used by Russia to cause conflicts between Poland and Ukraine and Poland and Lithuania. Russian propaganda can also use the narratives to undermine European unity, pointing to the course of the war, such as the lack of quick help for Poland by France or Great Britain.

Taking advantage of the approaching 75th anniversary of the end of World War II, Russia will continue its propaganda attacks on Poland. Thus, in the coming months, intensified Russian activity in media as well as in the forums of international organisations should be expected.

President Putin and other outlets for Russian propaganda will most likely maintain the accusation of cooperation between the Second Polish Republic and the Third Reich (using, for example, the annexation of Zaolzie by Poland in 1938) and the thesis that Polish politics contributed to the outbreak of World War II. It is possible that there will be further accusations of anti-Semitism against the power elite of the Second Republic of Poland and descriptions of their supposed willingness to cooperate with the Third Reich in the extermination of Jews, pointing to pre-war ideas of expelling Jews from Poland and instances of pogroms of the Jewish population and blackmail of Jews in hiding (shmaltsovnik) during the war.

Putin has already announced that he will write a text devoted to World War II based on archival materials located in Russia. By manipulating the sources, he will probably try to emphasize the importance of the Red Army in the liberation of Central and Eastern Europe from German occupation while depreciating the actions of countries such as Poland, which actively fought against Nazi Germany. Putin, in portraying the positive role of the USSR in the fight against the Third Reich, is likely to criticize Poland for removing monuments to the Red Army. It cannot be excluded that he will cite the help Poland received from the USSR for post-war reconstruction. Moreover, in the coming months, further Russian archive disclosures related to World War II should be expected and may attempt to put Poland, as well as the countries of Western Europe and the U.S., in a bad light.

The propaganda will also claim that Russia is the target of an information war related to World War II, with Russian politicians emphasizing that neo-Nazism is booming in the European Union, the U.S., and Ukraine.

The extensive historical campaign dedicated to the USSR’s victory in World War II, widely recognized in Russia as a heroic act, will also be aimed at strengthening support and consolidating Russian society around the power camp.

Therefore, Poland, by itself or in consultation with the Baltic States, Germany and others that support it in opposing the Russian information warfare tactics, should consider preparing a campaign directed at international public opinion and devoted to the course of World War II. Institutions dedicated to exploring the history of that period should be involved in creating the messages.

It will also be very important to direct the media campaign to the countries of the former USSR where the belief in the liberating role of the Red Army during World War II is still strong and, therefore, there is a great misunderstanding of the Polish authorities’ aim to remove the “monuments of gratitude” to the Red Army. An important element of the campaign should be to show how Poland cares for war cemeteries and sites of Red Army soldiers buried on its territory.

It is also worth it for Poland at the UN to actively counter the message behind and add nuance to the content of the resolution co-initiated by Russia that condemns the removal of monuments to soldiers fighting Nazism but seems to include the monuments of gratitude located in Poland. An important element of the discussion may be European Parliament Resolution B90098/2019 adopted on the 80th anniversary of the outbreak of World War II that condemned both Nazism and communism.

The activities (initiating debates, proposals for resolutions) of Polish parliamentarians in the assemblies of the Council of Europe and OSCE will also be very important, especially as Russia increases its ahistorical activity to spread its version of events related to World War II.

The goal of the Polish actions should be not only to respond to the Russian distortions of history but to help bolster accurate international historical memory of World War II.