Challenges for Belarusian Security Policy
11 (1584)
Russia’s aggression against Ukraine has proved it is ready for armed intervention in countries it considers to be within its zone of “privileged interests.” This is highly relevant to Belarus because its alliance with Russia, other international commitments, and lack of financial resources means it is unable to conduct independent security policy, and it is afraid of the growing tensions in Russia-NATO relations. Moreover, Belarusian territory is perceived by Russia to be within its defence perimeter. The limited possibilities of the Belarusian authorities to set their own security policy must be considered in NATO’s defence planning.
Anna Maria Dyner 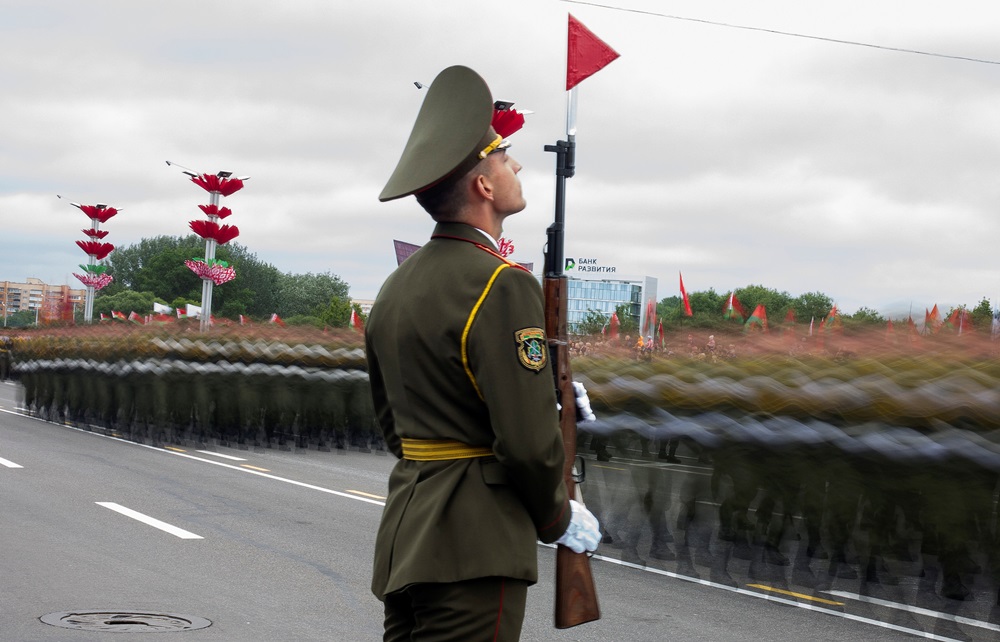 Defence of the Union State

The document Military Doctrine of the Republic of Belarus, adopted in 2016, acknowledges the Union State of Belarus and Russia and membership of the Collective Security Treaty Organisation (CSTO) as the basis of the country’s security guarantees. Its military cooperation with Russia is also carried out through an agreement on the protection of the border of the Union State from 2009 and which entered into force in 2012, which details such areas as operations of the common air defence system set up in 1995. Every year, both countries conduct a series of joint military exercises. The most important are Zapad (West) and Union Shield. These alternate every two years and are the main tests of the Regional Forces Group of Belarus and Russia. According to the December 1999 agreement on the establishment of the Union State, Belarus and Russia should pursue an agreed foreign and security policy and guarantee the integrity and inviolability of the Union State’s borders. Moreover, both states committed to maintaining the efficient operation of the Regional Forces Group. The agreement also gives both states the opportunity to jointly use military infrastructure and take other actions to maintain the defence capabilities of the Union State.

The latter was detailed in an agreement between the governments of Belarus and Russia and entered into force in November 2017. According to that document, the protection of bases on Belarusian territory and supplies of weaponry that Russian armed forces could use in the event of a threat to the Union State or open war fall under the responsibility of the Russian Ministry of Defence. In practice, this means that if Russia sees such a threat—though the criteria are not specified—it can deploy technical security bases to Belarus. Although the Belarusian authorities must agree to it, if Russia cites allied obligations, their acquiescence will be mere formality.

From the Russian point of view, Belarus is a valuable military ally. Thanks to the latter’s geographical position, Russia can presume its western defences are 540 km farther away from its own borders. Russia also has major military installations on Belarusian territory: A radiolocation station in Hantsavichy (outside Baranovichi), which monitors the upper atmosphere and outer space in a western-facing direction as part of Russia’s early warning detection system of incoming missile attacks, and a communications centre for nuclear submarines, located in Vileyka (in Minsk province). Since the Russians treat Belarus as a zone of privileged interests, their military presence on the Belarusian territory limits its independence in foreign and security policy.

Further restrictions stem from its membership of CSTO. Even if joint activities within this organisation, such as the military exercises Vzaimodeistviye (Cooperation), Unbreakable Brotherhood, and Battle Brotherhood comprise the multilateral military cooperation with former USSR states, at the same time, CSTO is a Russian tool for controlling the security policies of its members.

Despite very advanced cooperation with Russia, the Belarusian authorities recognise certain threats in it. The declared Belarusian military doctrine from July 2016 was in direct response to the changing political and military situation in Eastern Europe. Among significant threats, it listed attempts to revise the existing international order as well as hybrid threats and information warfare. The Belarusian authorities are thus aware of the dangers posed to their country by Russia’s aggressive policy towards Ukraine, which has put the latter in a state of acute political and economic confrontation with NATO and the EU. The rising tension between Russia and NATO has already resulted in increased military presence near the borders of Belarus. In response to Russia’s strengthened military presence in its Western Military District and NATO’s greater “forward presence” on its Eastern Flank, the Belarusians introduced into service the Polonez missile system, designed to strike land targets at a range of 300 km, and to spend funds to renovate its fleet of Su-27 fighters (NATO: Flanker). Moreover, Belarus for several years has opposed the placement of a Russian airbase on its territory. With Russia’s reactivation of the 689th aviation regiment in Kaliningrad Oblast,[1] in the short run, the Russians will most likely not pursue it further.

Despite all these steps, the Belarusian authorities are afraid that their limited capacities means they are unable to properly secure the territory of the country. Belarus spends about 1–1.5% of its GDP on its military. This equals about $500m (4–5% of the state budget). About 46,000 military and 13,000 civilian personnel serve in its military, in comparison to the 300,000 just in Russia’s Western Military District. It should also be noted that the defence system is de facto directed only to the west—Belarus is divided into two “Operational Commands,” the Western, located in Hrodna, and the Northwestern, sited in Barysaw.

The country’s relations with NATO is an attempt to pursue an independent policy. This cooperation started in 1995 when Belarus joined the Partnership for Peace Programme (PfP), and since 2004, Belarus has participated in the programme’s Planning and Review Process. As part of its participation in PfP, Belarus has assigned the following forces: a company to peacekeeping, a multifunctional nuclear/biological/chemical protection platoon, and seven health professionals and a mobile hospital.

Belarus’ cooperation with NATO has no important military significance, but for the Belarusian authorities, it is its only means of maintaining separate contacts with the Alliance. An example of this is the use of Belarusian diplomacy to inform NATO countries about the course of military exercises, such as Zapad 2017, but that does not mean, however, that Belarus wants to increase the cooperation. NATO is still perceived by the Belarusian military as the main military threat.

Belarus’ possibilities to conduct independent security policy, including maintaining neutrality, are negligible, mainly because of its political and military alliance with Russia and membership of CSTO.

Despite the need to strengthen its armed forces, Belarus’ lack of financial sources means it is unable to undertake major reforms or start a large rearmament program. For now, Belarus will remain dependent on Russian support, both in supplies of military equipment as well as in the organisation of exercises and military training. In NATO’s military planning, Belarus must be considered part of Russia’s defence system.

At the same time and despite Belarus’ high dependence on Russian military support, it has tried to increase contact with NATO, such as through the diplomatic effort tied to the Zapad 2017 exercises, so the Alliance should consider opening an information point in Minsk. There also might be an opportunity to improve Alliance information policy towards Belarusian society and, through contact with Belarus, can be an additional communications channel with Russia.